We’re trying to get the word around about Valhalla’s Memorial Day service this Saturday, May 24. Share a link to this post (http://cemeterychick.com/?p=202 ) or cut and paste into your own site. Thanks!

Finding the Lost
by Martha Kneib

When Susan Ing first looked at the place she calls the Hall of Lost Souls, she was dumbfounded. “The room just kept getting bigger. I mean, it’s big. It just kept growing.” On either side of her, lining the walls of a vault underneath the mausoleum at Valhalla Funeral Chapel, Crematory, and Cemetery on St. Charles Rock Road, were an estimated 2000-2500 boxes containing cremains that had never been claimed.

Undaunted, Susan pressed forward. She had two goals: to catalog every box, and to get those among them who were veterans a military burial. That was going to be, to put it mildly, a big job. It took months for Susan and two helpers, Kathie English and Elaine Sheahan, to document everything, and sometimes weeks to get the go-ahead for burial from Jefferson Barracks National Cemetery. But, in the end, Susan prevailed. She will see twenty-two of the formerly unclaimed boxes of remains interred at Jefferson Barracks in June. To her, being present at their interment is important. “I have to represent these guys. If no family shows up, it’s me.”

For Susan, a lifelong devotee of cemeteries and their history, donating her time to the unclaimed, and especially to the veterans, is a source of great satisfaction. “My take-away moment? The fact that twenty-two men are going to be properly buried where they belong.” Two of those men, she discovered, were Civil War veterans. All twenty-two will be honored at a Memorial Day service at Valhalla on May 24, 2014, and will then be transferred to Jefferson Barracks for their final interment.

For their part, Valhalla’s staff are equally invested in the Memorial Day service. Randy Singer, Funeral Director at Valhalla, said, “I am so thankful that the founders of Valhalla saw fit to safeguard these cremated remains, so this day could happen, even after all these years.”

Working with Susan has been Don Gerspach, the State Coordinator for Missouri for the Missing in America Project. The goal of the project is to find and inter the unclaimed cremated remains of America’s veterans. Over 1900 formerly forgotten veterans have received a military burial since the project began in 2007. Gerspach, who has been involved since 2008, is responsible for coordinating between volunteers and Veterans Affairs, though providing information to veterans’ organizations and the general public is what Gerspach sees as his most important role. The more people that know of the project, the more likely family members can be found.

Reforging those family connections, however, does not always happen. In September of 2013, two sets of cremains were interred at Jefferson Barracks due to Susan’s diligence. One of them, Frank Lemon Berryhill, had no family present, and so it was Susan who received the flag from the Honor Guard. She intends to pass the flag along should anyone in the family come forward.

Susan also ensures that everyone she finds is listed as “unclaimed cremains” on Find A Grave so that there’s a chance someone in the family might stumble across the information while doing genealogy online. Often, family members have no idea that their parents, or grandparents, never picked up a relative’s remains post-cremation. Susan says most family members she hears from are at least two generations removed from the deceased, and are shocked to discover that someone in their family has been sitting in a box for decades without a burial.

One thing Susan has discovered is that being forgotten is a fate that cuts across all social and class boundaries. One might think that the affluent would never leave their relatives behind, but Susan matched one of the unclaimed boxes at Valhalla to the Busch family.

Susan has no plans to stop trying to connect the dead with the living. “There’s so many people who can’t find grandpa and don’t realize he’s been sitting on a shelf for fifty years.”

One family she found, who currently reside in Oregon, have made plans to visit St. Louis in the fall of 2014 to claim a relative left behind at Valhalla. That’s just one more person, long forgotten, that Susan has helped restore to their family. Just one more of the lost becoming found, and going home.

To learn more about the Missing in America Project, check out their website at http://www.miap.us/

Did you know that the remains of thousands of people who are cremated go unclaimed?  That creamatoria, funeral homes, and cemeteries often have shelves full of boxes awaiting family members to pick them up, and that these boxes may have been there for years, or decades?

I had no idea until I read an essay by Thomas Lynch in his book The Undertaking.  Lynch, a funeral director, realized his funeral home was storing a closet full of boxes of cremains.  Fortunately for him, he worked in a small town, and so locating a family member and encouraging him or her to come pick up Aunt Thelma wasn’t that difficult.

Most places have a much more difficult time connecting the dead with the living, once the dead have been forgotten.

One organization that wants to make a difference to many of the people who remain in their boxed earthly limbo is the Missing in America Project.  This organization, which went nationwide in 2007, is endeavoring to find the remains of forgotten veterans, and to provide them with the burial with full military honors they deserve.

To date, the organization has found and buried over 1900 veterans.

Check out their website to see how you can help make sure all of America’s veterans are located and properly honored.

Arlington National Cemetery turned 150 years old this week.  The cemetery holds over 300,000 graves and adds roughly 25 graves per day.  It is, of course, the location of the Tomb of the Unknown Soldier, as well as being the final resting place of John F. Kennedy, Robert Kennedy, Edward “Ted” Kennedy, and thousands of others, including:

Roger Chaffee and Gus Grissom, astronauts who died in the Apollo 1 fire

Juliet Opie Hopkins, known as the Florence Nightingale of the South

Francis Gary Powers, U2 pilot shot down over the Soviet Union

Thomas Selfridge, first person to die in the crash of a powered aircraft

I was wandering through a cemetery when I spotted this little gem.  Three words, “More Than Conquerors,” sitting all by themselves on a stone.  On the surface, it seems very martial in tone, but I realized it was taken from one of the hymns we used to sing during our church services — Thine is the Glory.  Perhaps you grew up singing that one as well.

No more we doubt thee, glorious Prince of life;
life is naught without thee; aid us in our strife;
make us more than conquerors, through thy deathless love:
bring us safe through Jordan to thy home above.

The lyrics were written by Edmond Budry (1854-1932), and clearly, if you see the entire verse, the “conquerors” part is about defeating death.  That may or may not be clear to the visitor who sees the stone if they don’t know the hymn, though I suspect everyone in this person’s family, their friends, and their acquaintances, knew it.

Currently, we sing an updated version in our church.  Lyrics that sound like the church is advocating conquest have been edited out. The words now are:

Am I still frightened? One whom I adore,
Jesus, lives again, gives peace forevermore.
Jesus is my victory, life and strength and head;
Jesus is my glory, nothing shall I dread.

In the future, will it be obvious to anyone where these three words came from?  I wonder. 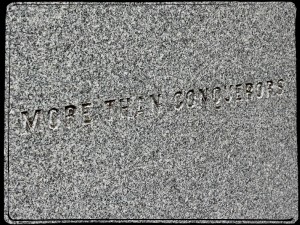 One thing I’ve heard from people who either don’t like cemeteries or just feel like complaining is that cemeteries are a “waste of space.”  Which, I suppose, means that once you dedicate a cemetery, you won’t be using that land for shopping malls or highways.  You know, the responsible way to use “space.”

I think that point of view is exactly backward.  Cemeteries aren’t wastes of space — just take a look at the photo below.  This photo shows the majority of Bellefontaine Cemetery (314 acres) and the southern portion of Calvary Cemetery (477 acres) from the air.  That’s nearly 800 acres of real estate set aside for over one hundred species of trees, as well as many varieties of shrubs, grasses, and flowers.  The cemeteries have ponds and provide homes for many species of wildlife. The cemeteries may be a place to lay our own to rest, but they also are spaces for the natural world to live and grow and thrive.

When you fly over the area at night, you see a dark pool of blackness in the midst of millions of streetlights, car headlights, residential areas, and parking lots.  When you fly over during the day, you see the welcoming green areas completely hemmed in by industry and residences.

Is it a poor use of land, to have hundreds of acres of green space in our city?  To have wildlife continue to share the world with us?  To foster the growth of trees and host the songs of the birds?

I don’t think so. 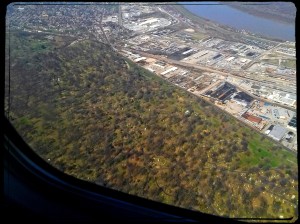