A friend of my mother’s wants to have her three dogs (who have been cremated and are in urns) placed in the casket with her when she is interred.  The cemetery where her parents are located told her they wouldn’t allow it — though I don’t know how they’d know unless they decided to do a casket-search before burial. Anyway, this friend asked my mother if she could find out if the cemetery where my mother’s relatives are buried would allow cremated pets in the casket. Their reaction: “Sure, no problem.” Subsequently, this friend bought three lots in the cemetery, one for herself and two for her parents, whom she intends to move from where they are now.

All because of her dogs.

I have a feeling that’s what’s going on in this picture. At first, I thought the people had paid to have their Pomeranian “Oly” on the stone with them the same way people have their favorite sports logos or hobbies engraved on their markers.  But I’m betting, if we were to open up one of those caskets, we’d find a little urn with Oly’s cremains inside.

If that’s so, then this cemetery clearly doesn’t mind a pet resting eternally with his or her owner. Which I think is sweet. 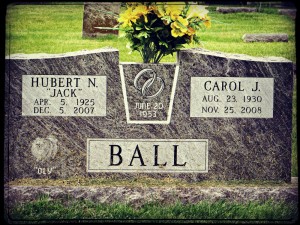